A Place of Mine

For some reason I’ve been finding writing hard at the minute, and I’m not all that sure why. I had half an idea of what to write last week, and then never completed it. Part of it I’m blaming on the fact that I’ve been ill and it’s sapped my motivation to do anything at the moment. The other part of it I can’t explain.

This week I’ve felt a bit more on a roll, and managing to find some inspiration from my everyday life (which reminds me that I should probably right a blog about the convention I was at last weekend, but that can wait another week or so), I’ve actually sat down with some kind of plan for tonight. I can’t promise cohesivity, or fluidity, or any sort of real direction. But it’s writing, on an actual theme for a change, so that’s a start. I’m finding George Ezra is helping me to feel productive right now as well, so hey if it works why not use it.

Anyway. I said this week I was inspired by events in my life this week, so I feel like I should start with the event. This week my mum got into an argument with one of my neighbours about the state of my garden. Now my garden is a mess at the moment, and has been for a few years, and I guess if you saw it on face value it is very easy to criticise. Especially when the new build houses behind me have these beautifully manicured, cookie cutter lawns.

Mine? It’s overgrown, it’s wild, there’s stuff that has been there for years that in all honestly just needs to be burnt or to go to the tip. You see when my Dad died and we inherited the house the garden had already been left to grow wild to an extent anyway. I think someone cut it every once in a while for my Dad, just to keep on top of it, but there hadn’t been any real gardening happening.

Then, after he died, the main focus for us was on getting the house cleared and into some kind of livable state again. The garden was left to continue growing wild. However, this winter and now coming in to spring we’ve been actively working to get it into some kind of acceptable state. It’s been slow going, and we’re only part way there. But I managed to find some before and after photos of a section of the garden, and the difference is tremendous. 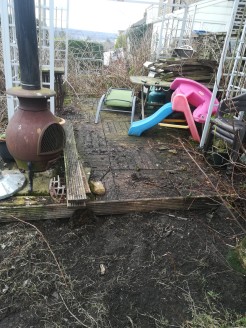 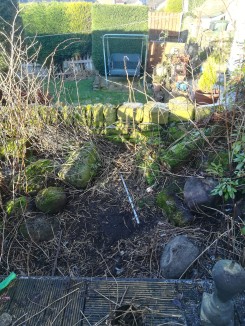 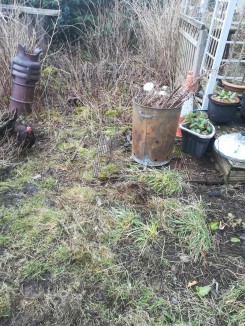 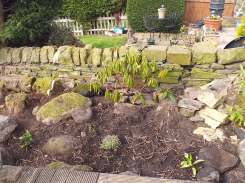 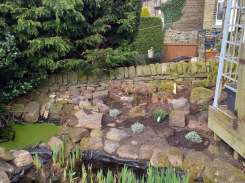 I think that’s why it’s so frustrating to have someone then turn around and say that it’s not good enough. When you’re trying your hardest to actually make a difference but you’re working within the constraints of time, money, and at the moment even your own body’s capabilities? Well that’s frustrating. Especially when the person criticising has the time and money to hire a gardener to make sure their garden looks amazing.

I’m struggling at the minute with being off work sick because I feel like I need to push myself to get back as soon as possible, even though I know that I’m not completely better yet. In fact that’s probably why I’m in this situation, because I’ve kept on pushing myself when I haven’t been in full health.

I think more often than not we can be our own worst critics. I know that I certainly can be. However, I think that what you’re doing and where you’re at, so long as you’re doing the best that you can manage, no matter what that may be, then that’s enough. But learning to accept that you’re doing enough? That’s hard.

Honestly though? I kind of like my garden being slightly wild, and I know the wildlife are definitely loving it. My garden is full of birdsong, of blackbirds and robins, jackdaws and magpies, wood pigeons and collared doves, house sparrows and goldfinches, blue tits and great tits and even occasionally a long tailed tit. My garden is alive. Especially at the minute when all the birds are busy collecting bits and pieces for their nests.